Today we are going to cover Double Sharps and Double Flats. You might think I made this up but it is an actual thing in music and it’s something that you should be aware of.

Sharps and Flats simply raise or lower a note by a half step. A half step is represented by the closest interval. On a piano, this is a set of two keys next to each other with no keys between.

So what about double sharps and double flats?

Here is how you would see them in your musical scores: 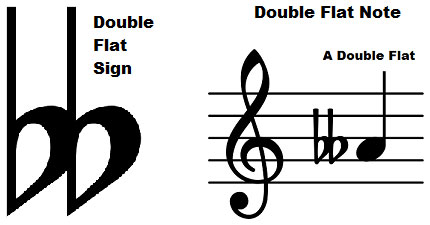 So what does this mean and how do you interpret these notes. Well if a sharp or flat is simply a half step either higher or lower – then a double sharp or double flat is a whole step (or two half steps) higher or lower than the written note.

So let’s take the example of C again. If you had a C double flat, you would be playing the same key on the piano as B flat or A sharp. But why would someone write a double sharp or a double flat instead of just writing the simpler version of the note? This is because most Western music is organized diatonically – built on scales which have all the letter names in order – line to space, space to line. Sometimes it becomes necessary to use double sharps or double flats in order to notate the music logically adhering to the scale the piece is based upon. (for more information on this subject watch our video on E sharps and C flats).

I hope this was helpful for you and if you have any questions, comments, or suggestions for future videos please contact us directly: info@LivingPianos.com (949) 244-3729.