You might wonder if there is a difference between the pedals on upright and grand pianos. Not only is there a difference, but there are actually no upright pianos with pedals that function the same as pedals on fine grand pianos!

Let’s discuss each of the three pedals and see how they differ from one-another:

The Sustain Pedal or the Damper Pedal (The Right Pedal)

This is the most commonly used piano pedal and it is the one pedal that functions the same on uprights and grand pianos.

The Right Pedal releases all the dampers so that the tone lives on after you release the keys. 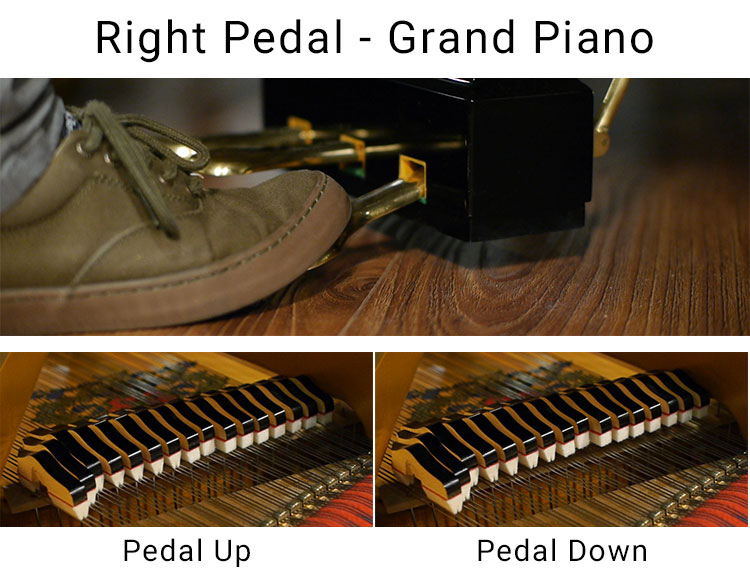 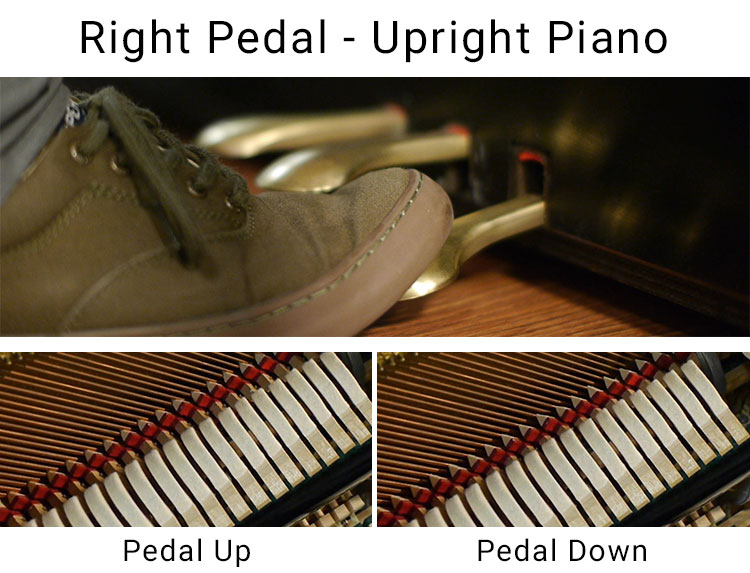 The Sostenuto Pedal (The Middle Pedal)

On a grand piano, the middle pedal functions as a selective hold pedal. It will release the dampers only on the notes that you depress and hold before pressing the pedal. To put it simply: You play some note – while holding them down, press the middle pedal and hold it down to keep the dampers of the held notes from going back down again after releasing the keys. Only those notes continue holding, but new notes played will not hold after you release the keys. 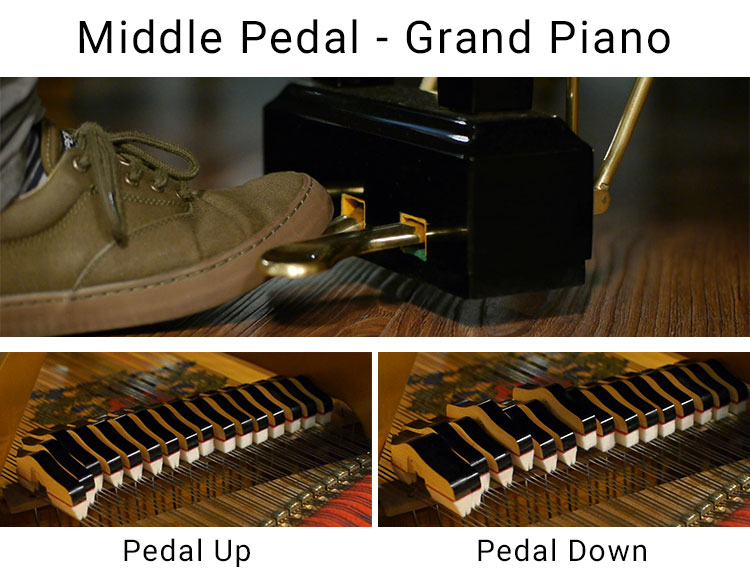 On upright pianos there are a couple different functions for the middle pedal but they rarely perform the function of a sostenuto pedal that a grand piano offers.

Some older upright pianos have a bass sustain for the middle pedal function. This will only release the dampers on the bass section of the piano and leave the other notes in the middle and the treble alone.

The reason for this is that most pieces of music that utilize the middle pedal have low notes that hold while other notes are played in the upper register. So, it functions almost like a sostenuto pedal in many musical contexts. 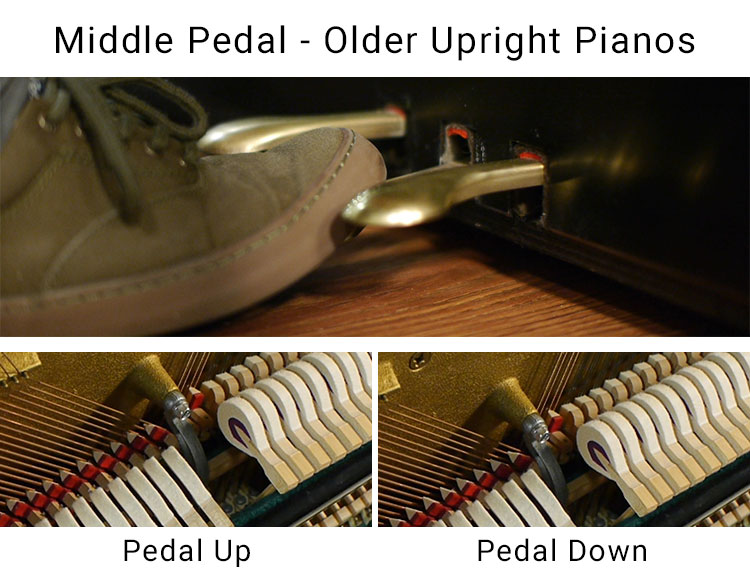 The practice pedal is designed to allow someone to practice the piano while reducing the volume of the piano substantially. It accomplishes this by placing a piece of felt between the hammers and the strings. The hammers then strike the felt and the volume of the notes is greatly reduced. This pedal will “lock” into place by pushing it down and to the left and will enable you to still utilize the right and left pedals on the piano in addition to utilizing the practice function.

This is a very useful pedal for homes or apartments where the sound of the piano could be bothersome to neighbors, parents or other members of the household. 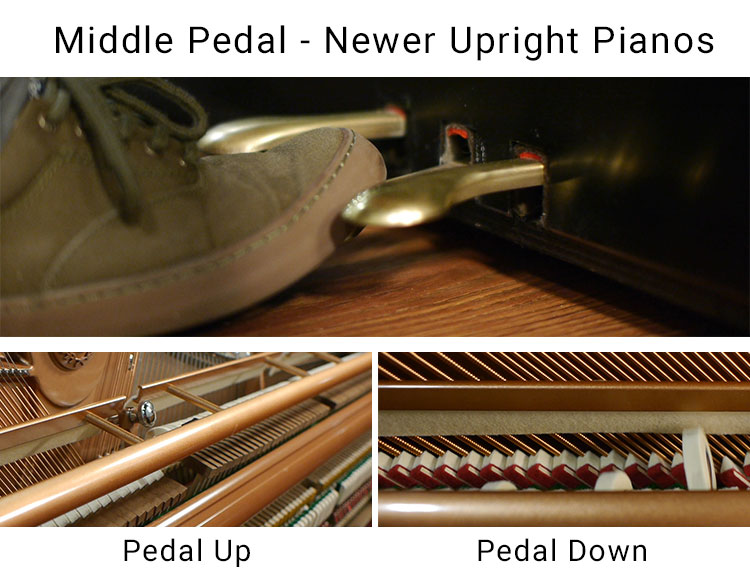 This pedal is important because it changes the tone of the piano. On a grand piano this pedal will shift the entire action – you can actually see the keys move from left to right – and the hammers will strike the strings off center making for a softer sound. 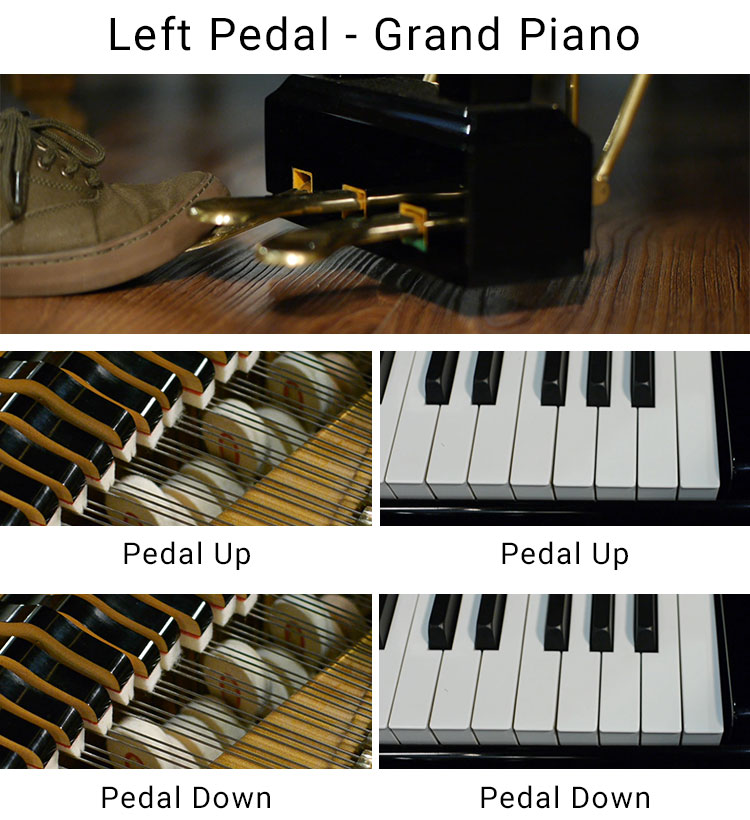 On upright pianos the left pedal does not function at all like it does on grand pianos. It does not shift the action from left to right but typically will move the action closer to the strings.

There is a little trick you can try with the left pedal on upright pianos. Because it shifts the action closer to the strings, if you hit the pedal quickly, it can make the hammers strike the strings and produce a sound. On some older pianos if you hold down the right pedal and pump the left pedal you can produce some very weird sounds! It’s certainly not meant to function this way but it’s something fun to try sometime. 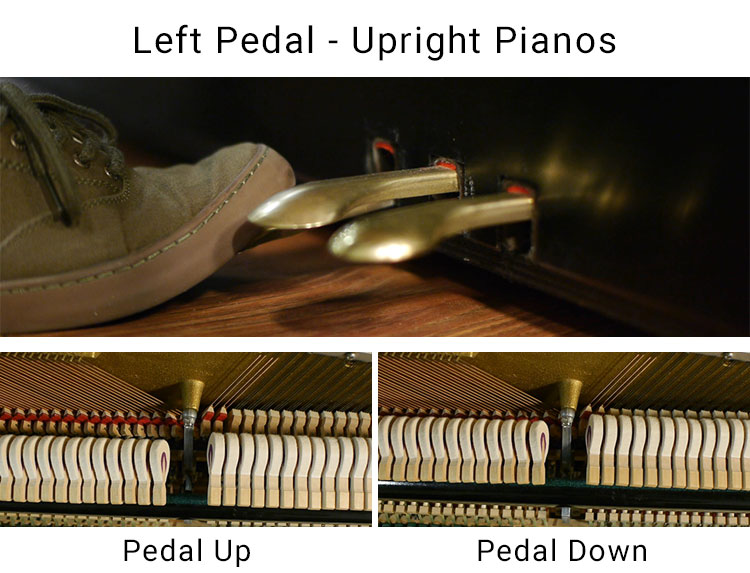 I hope that this solves the mystery of the pedals on upright pianos. There is a lot of misconceptions about how these pedals function when compared to grand pianos and my hope is that this article has shed light on this subject.

I hope this is helpful and if you have any questions about this topic or any other, please email me Robert@LivingPianos.com for more information.