You may have heard of a square grand piano, but I wouldn’t be surprised if you haven’t. Square grand pianos are an interesting side note in the development of the piano. They have a unique design that looks like a coffin when closed. But are they good instruments?

The piano has had a long development from the harpsichord to the early forte pianos from the Classical era. In the 19th century there was massive development of the piano bringing about the modern piano we know and love today. I have more information about this in my show, Living Piano: Journey Through Time – Historic Concert Experience.

In the mid to late 19th century we got an iteration of the piano that would soon become only an interesting footnote in its eventual development; the square grand piano. They are sometimes referred to as “coffin pianos” because when they are closed they look like a coffin. These pianos are certainly distinct in their appearance but technically they are inferior instruments.

Instead of aligning the strings with the keys – like a traditional piano – they are perpendicular. This means that the keys on one end of the keyboard are much longer than the keys on the other end of the keyboard. The part of the keys that are longer and shorter are behind the fallboard, not the part you see unless you remove the action – otherwise it appears as a normal keyboard to the player.

Here is an example of an action from a square grand piano: 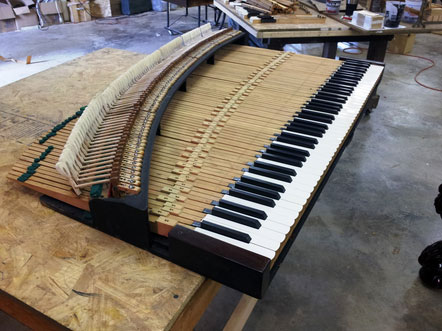 Notice how the keys get shorter and shorter.

Because of this design choice, these actions were notoriously difficult to regulate with any kind of consistency. Only a skilled technician who is used to working with these type of actions can get them regulated properly. Yet, even then they don’t respond as well as modern piano actions.

I welcome everyone’s comments and would love to hear your opinion of square grand pianos. Thanks again for joining me Robert Estrin Robert@LivingPianos.com (949) 244-3729