Mordents and trills look so similar on the page. You usually find these in Baroque era music of Handel, Bach, Scarlatti and other composers from that time. I want to show you one specific difference that’s very important. The beginning of the Sarabande movement of the 5th French Suite of Bach starts with a mordent. You can hear me play it without the mordent on the accompanying video first. Shortly after, there is a trill so you can discern the difference. You will hear it played first with no ornamentation. Mordents and trills differ from each other in two interesting ways. Bach wrote a mordent on the first note in the right hand which is a “B”. The secret to a mordent is you add the note below and then go back to the note that’s written so when you have a B you’re going to play B-A-B.

So what’s different about trills? Right after that, you have a trill. Trills start on the upper note. Typically trills can have more than one or two notes and this is for freedom of expression. In fact, the whole Baroque era is noted by its ornamentation. And it isn’t just music. Take a look at the architecture and the art of that period. It’s noted for the filigree and all the beautiful fine detail. Ornamentation is an opportunity for the performer to add their own expressive element. That’s why if you listen to different performances of the same exact pieces of Bach, Handel, Telemann, and other Baroque composers, the ornamentation can be quite different. You can listen to how it sounds with the ornamentation.

You have to watch the squiggly lines: the mordant has often has one less than trills and have a vertical line. 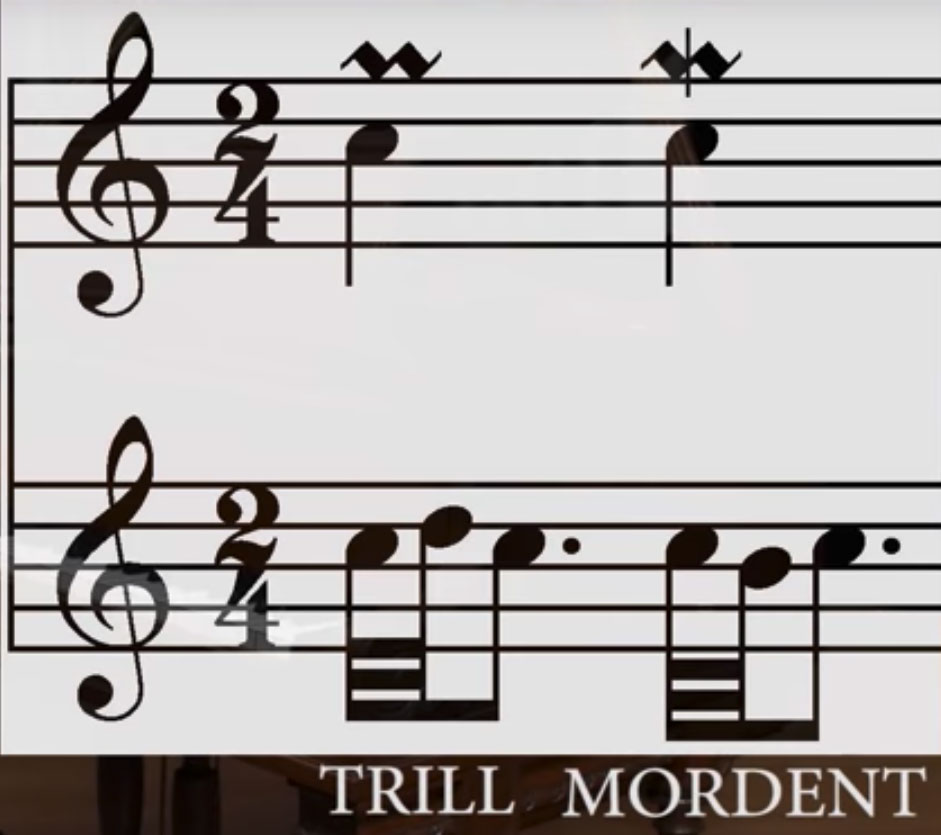 It’s kind of like deciphering a code. Interestingly, different performers have different ideas about what these squiggly lines, turns and all this means because we don’t really know what people played hundreds of years ago, do we? There are many books written on this subject and ultimately it’s up to you as a performer to play something you feel passionately about and really feels right to you. Sometimes with French Suites and other pieces that have repeats in all the sections, you can a do different ornamentation the first time compared to the second time around to make it even more interesting.

So that’s some information about mordents versus trills! Trills can be a little more elaborate since they can add more notes. Generally, trills go up and mordents go down. Trills often start on the auxiliary note which is the note above the note that is written and can include a flourishing of notes. There’s a whole world to this and I hope you’ve enjoyed this! Again, I am Robert Estrin at LivingPianos.com 949-244-3729